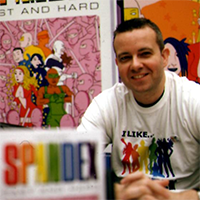 Martin Eden’s Eagle award nominated Spandex series has proven itself a huge hit on the indie comic scene. Comicsy caught up with Martin for another ‘Spotlight on…’

You can purchase Martin’s hit series Spandex via his Comicsy Shop.

When did you first decide that you wanted to create your own comics? 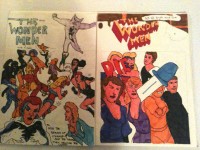 I always drew pictures from the age of 4, and started making comics when I was about 8. My mom read everything I did, all through my teenage years, and when I left university at 21, I decided that I should try and get my stuff out there to more people and see what they thought of it! After my first comic project (‘Contact’, a sci-fi comic written by Debbie Moon and drawn by me), I received tons of supportive feedback and very constructive criticism from people I didn’t even know. People wrote letters to us providing their honest opinions – no one hated it, no one loved it – but I found it really encouraging. I realised that the small press community was something I wanted to be part of, and I really enjoyed the whole process of making comics and I wanted to carry on.

Who has had the biggest influence on you outside the comics industry, and how did they affect your life?
I’ve always been influenced by people who were rejected at first and then found success or recognition. People like JK Rowling or Tori Amos – when they started their careers, they were rejected from everywhere. But their perseverance and dedication ultimately paid off. Every time I feel I’m not getting anywhere, I think about them.

Who has had the biggest influence on your comics career, and how has that person changed your work? 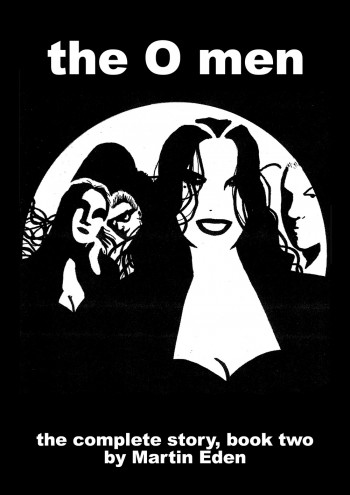 Artistic influences can be dangerous, as you have your own style, and sometimes you try to change it and adapt it – it can be a bad idea. I tried to copy artists like Ian Gibson and John Byrne when I was young, and they are so distinctive – it wasn’t a good idea! But I am now hugely influenced by Jaime Hernandez. I find his artwork absolutely breathtaking – every panel is like a life-drawing – I don’t know how he does it. I want to improve and improve and be as good as him – in my own way. Not in terms of style, but in terms of standards, output, quality and ability.

What do you do to recharge your creative batteries?
It’s not a conscious decision, but if I go and see an exciting/loud movie, or a movie that really moves me, it can completely change my mindset and the direction I want my comics to go in. I get really pumped up and full of adrenaline. 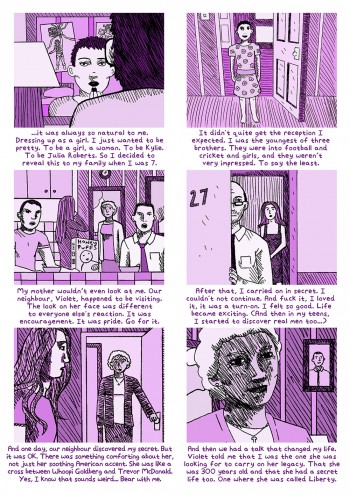 I have a day job and I work full time, 9 to 5.30, so all my comics are done in my spare time. So an average day is: Work; try and do bits and pieces at lunchtime (mainly Marketing or adding review links to Facebook and my website); finish work, and then if I’m not swimming or going out, I’ll just draw solidly, after eating, until 10pm or 11pm. I can’t draw later than 11 as I get too tired and it starts to get a bit blurry! I tend to do a lot of drawing at the weekend, especially on Sundays, if I’m not going out and about. I can get a huge amount done on a Sunday.

What tools do you use to create comics and what makes them the ‘right tools’ for you?
Everyone is different and everyone learns what works for them. I do a lot of my best sketching with a biro, but that doesn’t always scan well. I’m perfectly happy when I’ve got any old pencil in my hand and some blank paper. For art pens, I use Pilot or Staedtler drawing pens (0.1, 0.2 and 0.3) but they are getting harder to find in shops!

What element of your work gives you the most personal satisfaction?
I think the most exciting moment is getting a proof copy back from the printer. After months of hard work, you finally see the result.

What has been the most rewarding project in your professional career – in or out of comics – and why? 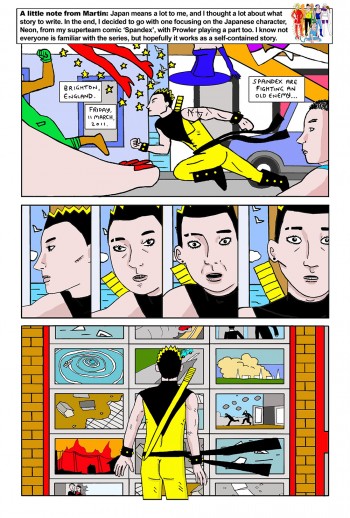 I was asked to contribute a comic strip to Spirit of Hope – which was a charity anthology graphic novel with proceeds going towards relief for victims of disasters, including the Japanese tsunami. I was really glad to be involved with the project as Japan is very close to my heart – I adore the culture and I started learning Japanese five years ago – and I’ve made many Japanese friends. It was also pretty much the first time I’d been published professionally – I’ve always usually done my own thing – so it was very exciting. I did a story about how Neon – my Japanese Spandex character – was affected by the Japanese tsunami.

What’s the best piece of comics advice you’ve ever heard?
I’ve never heard it directly, but it’s just a general feeling I’ve picked up on. Be careful with your money. Why print up 1000s of copies? Print small, and take it from there. Avoid giving too many copies away, as you will always need them (it might not feel like that at a slow convention – but you will still need them a few years later), and don’t be frightened to say no to ‘swaps’ (ie, if someone wants to swap their black and white mini-comic for your A4 colour comic!). It’s not easy, but you really have to be hard-headed sometimes.

Time to get philosophical: What’s the most important ‘big idea’ that you’ve learned in life – in or out of comics – and why is it important?
There’s a couple of things. My dad always says ‘be nice to people on the way up, as you never know who’ll you need on the way down.’ So I always try to be polite and well-mannered to people (even people that annoy me, hehe).

I also think criticism is important. Listen to it, but learn whose criticism you trust. I’ve had hundreds of ‘internet comments’ written about me, after website interviews/features – and you know what, I no longer read any of them. People can be quite abusive and they judge you and your comic without even having read it. Decide whose opinions you trust, and listen to them.

You can purchase Martin’s hit series Spandex via his Comicsy Shop. 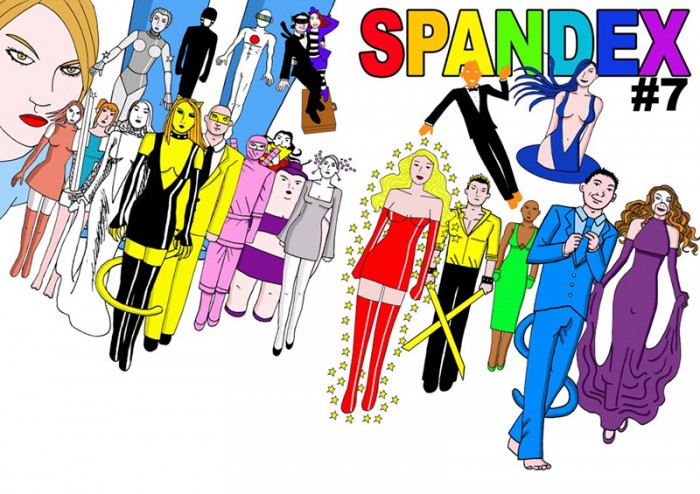