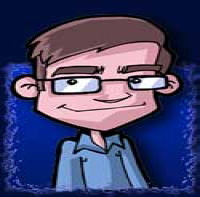 This week the spotlight shines on comic book writer David Berner of Broken Voice Comics. The second volume of his two-part graphic novel Shades will finally be available in print from this April. You can pre-order this, or purchase David’s work via his Comicsy Shop.

1. When did you first decide that you wanted to create your own comics?
Well, I started writing the script for Shades way back in 2003, so the short answer is ten or eleven years ago! Back then I’d only recently rediscovered comics, and I was impressed with the way Watchmen and The Dark Knight Returns managed to combine serious themes and excellent writing with what – as far as the narrative was concerned – were superhero stories; surely one of the most derided genres in any medium!

Struck by the sophistication of Watchmen and DKR, I decided to see if I could write a graphic novel of my own. I’d already been toying with the idea of trying to write a (prose) novel which explored the British national character and, at some point, I had the brainwave of making that idea the theme of my graphic novel. It’s been a long journey, but – when I look at the finished books – I think it’s been ten years well spent! 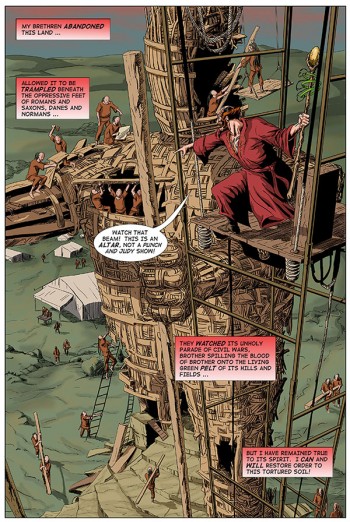 2. Who has had the biggest influence on you outside the comics industry, and how did they affect your life?
As far as writing is concerned, I’m part of that generation that grew up reading Enid Blyton, while all the so-called experts and academics were busy telling our parents how bad an influence her books were! As far as I can tell, the only effect it had on my life was to instil in me a life-long love of fiction and a desire to write my own. Just goes to show how little the experts know, eh?!

3. Who has had the biggest influence on your comics career, and how has that person changed your work?
I’m pretty sure I don’t have a comics “career” (at least not yet!) but, as I mentioned before, Watchmen and DKR were the books which directly inspired me to write Shades, so I suppose I should say Alan Moore and Frank Miller. I can’t say they particularly changed my work in any way, but Moore’s books certainly opened my eyes to the medium’s ability to incorporate “big ideas”, while DKR showcased its ability to delve into a character’s psyche. To do that within the framework of a fun-to-read action/adventure story? I think it’s sad that, nearly thirty years later, there are still so few writers working in comics who are even trying to do that.

4. What do you do to recharge your creative batteries?
Music helps! As with comics, I love anything where the artist is trying to create something interesting and original without falling into the trap of becoming obscure and self-indulgent. Blur, Garbage, the Yeah Yeah Yeahs, Muse and Savages are all good. At heart, though, I’m a child of the glam-rock Seventies so, when I’m in need of real inspiration, I wheel out the early Bowie, Roxy Music or Cockney Rebel. If they don’t get the creative juices flowing, nothing will!

5. Describe your typical work routine.
Wow. Do any indy creators actually have a typical routine? Some days I spend several hours writing non-stop, others I might spend all day trying to find new ways to promote what I’ve written, or checking artwork. For the second volume of Shades I took on lettering duties, so I spent a lot of time teaching myself how to do that. The one thing that’s probably “typical” is I usually spend far more time managing my projects than writing them!

6. What tools do you use to create comics and what makes them the “right tools” for you?
Being merely the lowly writer, not an artist, my tools are pretty basic: I scribble my planning notes in a notebook and write my scripts in MS Word. I don’t know what tools my artists use, but the results look like magic to me, so I’ve always assumed they include a cauldron, a wand and possibly a pentagram or two!

7. What element of your work gives you the most personal satisfaction?
So many different aspects, to be honest. It’s always cool to finish a script that seems to work. I love it when I receive a completed page from an artist and they’ve managed to capture everything I had in mind and added a special something of their own that makes it even better than I could have imagined. When I received the first copies of Shades from the printer, that was an amazing feeling too.

More than anything else, though, it would be the feedback I received and the friends I made online while I was serialising Shades at the Drunk Duck website. When a project takes as long to put together as Shades did, you sometimes need to be reassured you’re not alone, and the sense of community there was second to none!

8. What has been the most rewarding project in your professional career – in or out of comics – and why?
So far the only project I can properly call a “professional” assignment has been an adaptation of an Edgar Allen Poe short story (The Oval Portrait) which was included in the Nevermore anthology published by Self Made Hero. It was only a short piece but seeing my name listed alongside contributors like Jamie Delano and Moore/Reppion was definitely a buzz!

9. What’s the best piece of comics advice you’ve ever heard?
Honestly, I think most of the comics advice I’ve ever heard has been pretty bad! Professional and semi-pro artists love to tell newcomers that they should never work unless they’re being paid up front. How many artists have followed that advice and now spend all their time working only on projects they have no interest in (or, worse, none at all!)? Some writers seem to enjoy telling others how many words they should include on a page, and it’s usually very few. I have to wonder, have they ever read anything by Moore or Gaiman?! The reality is that what works for one person may be totally wrong for someone else. The pictures should be able to tell the story without the words? Try reading an Asterix book in the original French (well, assuming you don’t speak French, of course!)

My advice, for what it’s worth, is to seek out as much advice as you can, but to take it all with a pinch of salt. Use what works for you and your project, and feel free to ignore the rest!

10. Time to get philosophical: What’s the most important “big idea” that you’ve learned in life – in or out of comics – and why is it important?
I suppose my one big, guiding principle in life has always been the old-fashioned maxim: “do as you would be done by”. Comics are (often) a collaborative medium and in this internet age when it only takes a few seconds for a difference of opinion to escalate into an argument, and mere minutes for an argument to degenerate into personal insults and spiteful trolling, it’s more important than ever that artists take the time to understand a writer’s position and vice versa. Unless you’re creating the entire comic alone, working on making the collaboration work can be just as important as working on the actual comic.